The aim of PLACED-Lives is to examine the influence of critical transitions (manifest as rupture events) in the older adult life course on the accumulation of multidimensional social exclusion in later life, and the role of place and community in mediating this exclusion.

The focus of PLACED-Lives on life-course ruptures is grounded in critical gerontological traditions, and responds in general terms to a broader paucity of research on later life transitions (Grenier 2012). Transitions, the events that surround them and the life trajectories that they produce have the power to construct deleterious and favourable impacts for older people, and their wider relational networks (Elder et al. 2003; Dannefer and Settersen 2010; Alwin 2012; Bengtson et al. 2012). They also implicate individual, collective, institutional and structural components (Meyer 2005; Kohli 2007; Dannefer and Kelley-Moore 2009). The focus on the older adult place relationship is positioned within the behavioural context of older people spending more time in their place (Rowles, 1978; Oswald and Wahl, 2005; Buffel, 2012), and a capability context of where age-related declines can mean older people are more susceptible to environmental factors (Golant 2011; Wahl et al. 2012).

To gather existing research and policy knowledge on older adult life-course ruptures, their connections to place, and their association with experiences of exclusion in later life;

To develop an empirical understanding of pathways to exclusion arising from life-course ruptures, investigating the role of structural and individual level factors in this exclusion;

To explore older people’s relationship with place for those who have experienced the life-course ruptures, in different kinds of places, and to assess the impact of the rupture itself on this relationship;

To explore older people’s relationship with place for those who have experienced the life-course ruptures, in different kinds of places, and to assess the impact of the rupture itself on this relationship;

To explore what constitutes social inclusion in place for those who have experienced the life-course ruptures, living in different kinds of places;

To direct a re-orientation of the role of place in policy and practice intervention models for addressing life-course ruptures. 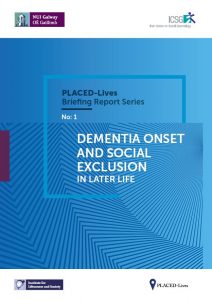 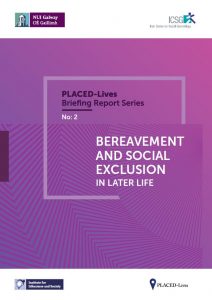 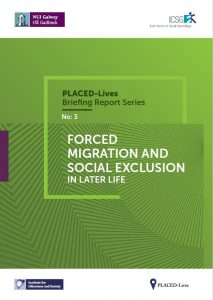 Irish Centre for Social Gerontology
With a view to informing a holistic understanding of later life in public policy, the ICSG conducts research on ageing and the life course that responds to gaps in scientific knowledge, policy and practice, while promoting the diversity of ageing experiences.
Our Projects
Contact Details